ENGLA-LAND the land of the Angles

The name "England" is derived from the Old English name Engla land, which means "land of the Angles". The Angles were one of the Germanic tribes that settled in Great Britain during the Early Middle Ages. The Angles came from the Angeln peninsula in the Bay of Kiel area of the Baltic Sea. According to the Oxford English Dictionary, the first known use of "England" to refer to the southern part of the island of Great Britain occurs in 897, and its modern spelling was first used in 1538.
England is the largest of the three political divisions within the island of Great Britain. Bound by Scotland to the north and Wales to the west, England is no more than 29km from France across the narrowest part of the English Channel. Much of England is flat or low-lying. In the north is a range of limestone hills, known as the Pennines, to the west are the Cumbrian Mountains and the Lake District. South of the Pennines is the heavily-populated Midlands, and in the south-west peninsula, known as the West country, is a plateau with granite outcrops, good dairy farming and a rugged coastline. The rest of the country is known as the English Lowlands, a mixture of farmland, low hills, an industrial belt and the massive city of London.
England was once almost entirely covered with woodland, but tree cover is now the second lowest in Europe (after Ireland). Since early this century the government has been planting conifers to reverse this situation, but the pines have turned the soils around them acid and destroyed large areas of ancient peatland. Other common trees include oak, elm, chestnut, lime (not the citrus variety), ash and beech. Although there isn't much tall flora around, you'll see plenty of lovely wildflowers in spring - snowdrops, daffodils, bluebells, primroses, buttercups and cowslips all lend a touch of colour to the English countryside. On the moors there are several varieties of flowering heathers.
The red deer is the largest mammal in England, and there are plenty of them (as well as fallow and roe deer) around. Foxes prosper, and if you're lucky you may see a badger or hedgehog. Introduced American grey squirrels are forcing out the smaller local red variety. Rabbits are everywhere, while smaller rodents such as the shrew, harvest mouse and water vole are less common (but frightfully cute). England's only poisonous snake, the adder, is rare and protected. Birdwatching is a popular pastime in Britain, but while the numbers and diversity of coastal bird species do not appear to be in danger, the same cannot be said for other British birds - a number of species that were quite common only 25 years ago are rapidly dwindling because of habitat destruction.
England's national parks cover about 7% of the country and include Dartmoor, Exmoor, the Lake District, the Peak District, the Yorkshire Dales, the North York Moors, the New Forest, the Broads and Northumberland. English national parks are not wilderness areas, but they do include areas of outstanding national beauty - they also tend to be privately owned and provide an antidote to the hectic pace of many cities. 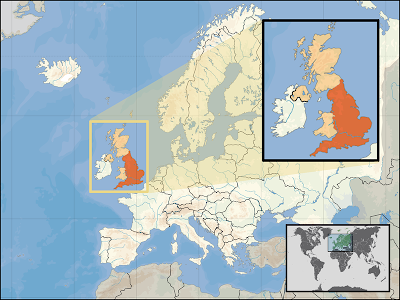 image courtesy :-http://en.wikipedia.org/wiki/File:Europe_location_ENG2.png
England's climate is mild and damp, with temperatures moderated by the light winds that blow in off its relatively warm seas. Temperatures inland don't get much below freezing in winter (December to February), or much above 30°C (86°F) in summer (June to August). The north is the coldest area; London, the south-east and the West Country are the warmest. Rainfall is greatest in hilly areas and in the West Country. You can expect cloudy weather and light drizzle in any part of England at any time. 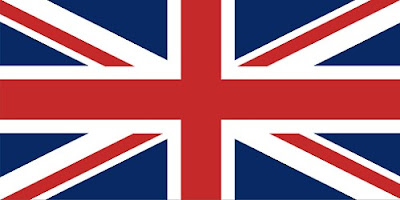 The Union Flag, popularly known as the Union Jack, is the national flag of the United Kingdom. It is the British flag. It is called the Union Flag because it symbolizes the administrative union of the countries of the United Kingdom. It is made up up of the individual Flags of three of the Kingdom's countries all united under one Sovereign - the countries of 'England, of 'Scotland' and of 'Northern Ireland' (since 1921 only Northern Ireland has been part of the United Kingdom). As Wales was not a Kingdom but a Principality it could not be included on the flag.
The Flag of England is the St George's Cross (heraldic blazon: Argent, a cross gules). The red cross appeared as an emblem of England during the Middle Ages and the Crusades and is one of the earliest known emblems representing England. It also represents the official arms of the Most Noble Order of the Garter, and it achieved status as the national flag of England during the sixteenth century.
Saint George became the patron saint of England in the thirteenth century, and the legend of Saint George slaying a dragon dates from the twelfth century.

At the beginning of the Crusades, a red cross on white was already associated with England because this was St George's cross, the emblem associated with England's patron saint. Although the Pope decided English crusaders would be distinguished by wearing a white cross on red, and French crusaders a red cross on white (Italian knights were allocated a yellow cross on a white background), English knights soon decided to claim "their" cross of red on white, like the French. In January 1188, in a meeting between Henry II of England and Philip II of France, the two rivals agreed to exchange flags (France later changed its new white cross on red for a white cross on a dark blue flag). Some French knights carried on using the red cross however, and as English knights wore this pattern as well, the red cross on white became the typical crusader symbol regardless of nationality.
The flag appeared during the Middle Ages. The St George's Cross was used as an emblem (but not as a flag) of England was in a roll of account relating to the Welsh War of 1275. The English royalist forces at the Battle of Evesham in 1265 used a red cross on their uniforms, to distinguish themselves from the white crosses used by the rebel barons at the Battle of Lewes a year earlier.
England has no official National anthem of its own; generally the United Kingdom and Commonwealth anthem, "God Save the Queen", is used. There have been calls for a unique national anthem to be adopted for England specifically.

The national flower of England is the rose. The flower has been adopted as England’s emblem since the time of the Wars of the Roses - civil wars (1455-1485) between the royal house of Lancaster (whose emblem was a red rose) and the royal house of York (whose emblem was a white rose). The oak is the national tree of England. The National Bird of England is Robin.
Posted by shishir krishna at 12:21 PM